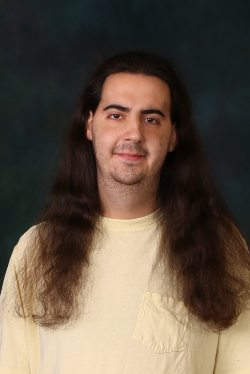 What do you enjoy doing?
I enjoy role playing games like Dungeons and Dragons. I watch videos on You Tube. There are endless topics there. Topics of interest vary. Currently, I am watching videos about ride sharing.  I’m watching short videos about how drivers handle difficult situations with passengers… Just to be prepared.

How does the hire a car thing work?
I wouldn’t accept a scheduled pick-up from Boston or someone who would want to go to Boston. But I can select a scheduled ride in towns closer to me and drive then to nearby towns.

When you were little you loved to read.  What are your favorite books of your childhood?
There are two, they are right across the room from me. Borrowed Black, it’s a story about this creature who borrows everything from his surroundings. He even borrowed the wind and the moon. The second book is The Handicapped Squirrel. When I was young in New Hampshire Borrowed Black was the one book that I repeatedly checked out.

What genre of entertainment do you find appealing?
I like fantasy, maybe some horror but not a lot. I’ll watch brief series on a given topic. For example, there was recently a documentary type series that went behind the scenes of a Boston hospital that I found interesting. It wasn’t like those fake medical shows that are all staged, it was real.

When did you have the heart transplant?
I was nearly fifteen years old.

Didn’t you ask to see the dates on the drugs before they gave them to you? Wasn’t there one occasion when the meds were outdated?
(Laugh) Yes, because it wasn’t from my “stash”. It just came up from the pharmacy and I wasn’t sure who had looked at the dates.

Have you ever tested your limits or pushed beyond your limits?
When I was in the second grade, we were asked to write out our New Year resolution. I wrote “I am going to try to run faster.” I thought it was something I could control. Along the way I would try things and learn what I could and couldn’t do. I learned what things I should try to push and what I shouldn’t.

How do you know when you have reached your limit?
When you can’t move you know you’ve reached your limit. It’s a unique sensation, hard to describe. It’s like your legs get heavier. It’s not like it burns but it is something like that. At a certain point a limb refuses to move, and you realize “I’m stuck.”

When I was in high school the IEP protocol allowed me to go to two places to rest when I couldn’t move because if I couldn’t move, I sure couldn’t get all the way across campus to get to the nurse’s office. That made it a little easier. I would edge myself to the wall and wait until I could move trying to stay out of the way of students so I wouldn’t get knocked over.

You’re now twenty-seven. Do you find your stamina is changing as you get older?
I think to say it gets progressively worse in general is probably true.

Did you notice a boost in energy after having the transplant when you were fifteen?
I did. The best metaphor is like when you fill your gas tank up. There’s a little buffer above full. That’s what it feels like. You have all your energy back plus that little extra but eventually the gauge begins to go down.

What do you do to keep things as normal as possible for your child when they are out of school for an extended period of time?
Make sure your child’s classmates know why he is out. I was out for an entire year. I don’t think my classmates knew. I did receive notes from people I knew but the writing was always the same. Schools don’t talk about the illness. What would have happened if I died? What would have been the explanation then? Why not tell kids why their classmates are missing?

Do you feel like your friends moved on while you were out?
Like most people, I had a few close friends in school, but I had numerous acquaintances. While you are gone those people move on to form their own groups and go through shared experiences and while they move on you are gone. When you get back you only have those two or three people who are there to talk to you.

If I was ever in a crisis situation, I would want you there because you would be the voice of calm and reason.
Depends on the scenario, but sure.

My scenario is going to be I had a flat tire. That’s my crisis.
Well, we’re screwed because I don’t know how to change a tire.