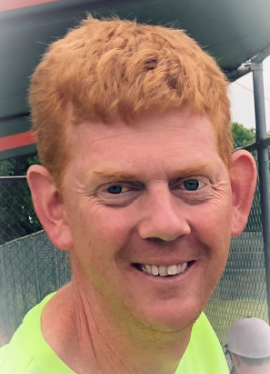 How old are you now?

When were you diagnosed with Barth syndrome?

I was diagnosed with Barth syndrome about a month ago.

Did you have any symptoms?

I was always very thin.  I was about 5’6” until I was a senior but then I really grew over my senior year. When other kids were struggling to keep their weight down, I struggled to keep my weight up to participate in wrestling. I am 6’3” now.

I did have a history of heart problems.  When I was around six weeks old, I had an episode when I turned blue.  My mom took me to the hospital, and by the time I got there, I looked pretty much normal.  They determined that I had a heart problem and have been treated for that ever since.  The only diagnosis I had in my early years was endocardial fibroelastosis.

I would experience shortness of breath when I got too tired.  I learned to do things differently from early on.  I didn’t have a choice.  I had to learn to work smarter instead of harder.  My mom reminded me that when other children were pushing cars around the room and chasing them from one side of the room to the other, I sat and played with my toys within arm's reach.  I didn’t chase them.  I’ve pretty much been able to do the things I have wanted to do in my life. I may not have been a triathlete, but I was able to play as the pitcher on the baseball team.

I had a mitral valve repair in 2001 when I was twenty, and the surgeon diagnosed me with Marfan syndrome based upon the tissue that he had seen.  A few years later, when I was about twenty-three, I was referred to Cleveland Clinic by the doctors at Columbus Children’s Hospital to see an adult doctor.  I was followed by doctors through the Marfan Clinic at Cleveland Clinic.

I had episodes of atrial fibrillations in 2006.  I was on medications to treat that for many years.

Around Halloween of 2018 I came down with a cold, or what I thought to be a bad cold.  I had this cough that I couldn’t shake.  I thought it was pneumonia.  I went to the doctor.  He ordered an x-ray.  It didn’t appear to be pneumonia, but he still treated me with antibiotics and other interventions as he would to treat pneumonia.  I couldn’t shake it.  I got to the point where I just couldn’t breathe.  I went to the emergency department where they treated me with fluids and released me the next day.  It got worse.  I couldn’t even make it up the flight of stairs without feeling totally winded.  I went to Cleveland Clinic to be seen.  They arranged for me to have a catheterization and pretty much told me that I wasn’t leaving until I had a transplant. I had a heart transplant on my 44th birthday in 2019.

That was difficult.  I have four loving children.  I remember very well the worry I had about not being there for them.  To see their faces at the time was beyond difficult.  This process made them grow a lot.

Do you have any relatives who have BTHS?

I had a brother who was five years older than me who died at birth.  From what I understand, he only lived a few moments.  Tissue from my explanted heart was compared to the findings of my brother’s.  It was confirmed that my brother and I had the same diagnosis.  The doctors were certain it was Marfan syndrome.

So what prompted you to go through with genetic testing?

Marfan affects girls and boys.  I have children.  My wife and I wanted to go through with genetic testing to confirm that I had Marfan syndrome.  We wanted to know for a fact because we needed to know how that could affect our children and how it might affect their children.  I don’t think anyone expected the findings to come back as Barth syndrome, not even the doctors.

So, what was it like to have this diagnosis all your life and then you find out as an adult that it was incorrect, what was that experience like?

It caused more concern because it is a certainty that my daughters are carriers of Barth syndrome.  With the Marfan it wasn’t a certainty that my children would be carriers.  Hopefully over time they will come up with something that will help my daughters and other carriers from passing this along to their children.  The grief that I feel for my daughters is much like the grief my mother feels as a carrier in thinking you are responsible for passing a genetic condition along to someone you love that could cause them harm, even if it was unwittingly.  It’s very troubling.

What other things do you enjoy doing?

I enjoy hunting and fishing.  I just love being outdoors.  I love the solitude while being out in the woods.  I enjoy taking the children out with me as well.  I really enjoyed spending time with my father-in-law out in the woods.  When I was a kid, I would come home from school and go rabbit hunting.  While other kids were out playing sports, I worked with dogs and went rabbit hunting.  I taught them to go fetch the rabbit.   I played sports but when kids were chosen for the team, I wasn’t the one that would be picked first.  That would have been my cousin.  I’m not complaining.  Compared to what the others go through with Barth I consider myself lucky.

I worked on a dairy farm milking cows when I was in high school. I enjoyed working on the farm. Cows don’t argue with you.  They are happy to see you.  Until I had the transplant, I raised chickens and turkeys.  The kids are wanting to raise chickens.

Any piece of advice to the younger you?

Before I knew I had Barth syndrome.  I knew I was different than other kids.  I knew I had a heart problem, now I just have a name to give to it.  I was concerned about dying.  No one knows what the future holds.  Except we know that everyone dies.  There will always be someone worse off than you and there will always be people better off than you.   Hopefully if we all work together, we can change the future.  Live the best life you can.