Genetics and Inheritance of Barth Syndrome 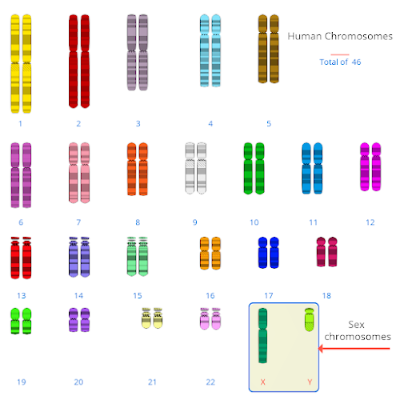 This is the karyotype of a male. A karyotype is the number and visual appearance of the chromosomes in the cell nuclei of an organism or species.

Every cell in the body contains 46 chromosomes, each of which is made up of hundreds or thousands of genes. The chromosomes are organized into 23 pairs, one chromosome of each pair coming from each parent. The two chromosomes of each of the first 22 pairs have the same size and contain the same number of genes in both men and women, but the 23rd pair, the “sex chromosomes,” is different.

For this pair, females have two equally matched “X” chromosomes, whereas males have one X chromosome and a much smaller “Y” chromosome, which contains only a few of the genes on the paired X-chromosome plus a few genes that only occur on the Y chromosome.

If a woman carrier has a girl, there is a 50% (1 in 2) risk that the girl will be a healthy carrier, like her mother.

For men with Barth syndrome who have children, all of their daughters will be carriers.

Men do not pass their X chromosomes to their sons.  Therefore, all the sons of men with Barth syndrome are completely healthy.

Sometimes boys are born with X-linked conditions even though their mothers are not carriers.  This is called a spontaneous variant.  When this happens, it is particularly important to get a genetic specialists advice about future pregnancies. 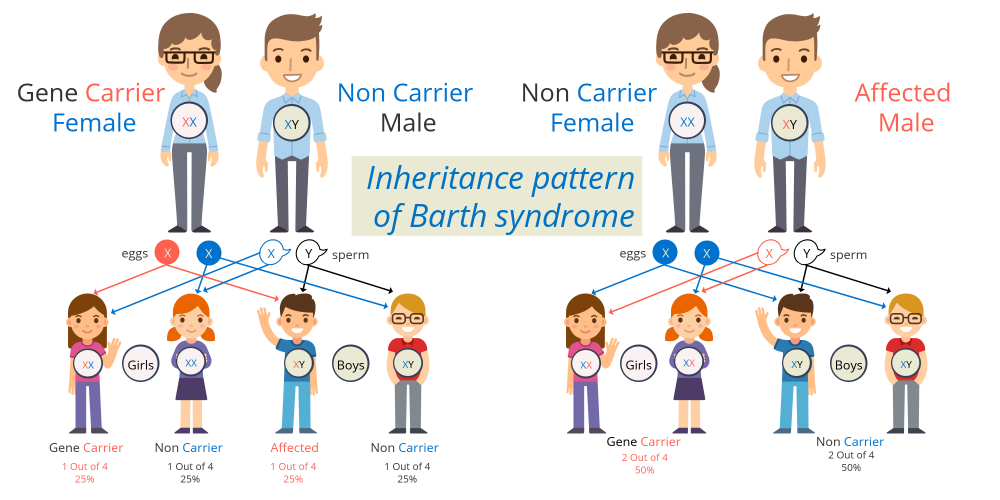 The inheritance of Barth syndrome follows an “X-linked” (or “sex-linked”) recessive pattern in which females can be carriers of a TAZ mutation but only males will have the disease. Because females have two copies of the X chromosome, they also have two copies of every gene on the X chromosome. Because TAZ genetic changes are very rare, a female who inherits one chromosome carrying a variant of the gene for Barth syndrome from one parent will almost always inherit a normal X chromosome from the other parent.

In all Barth mothers who carry a TAZ variant on one of their two X-chromosomes, the normal TAZ gene on the other X chromosome provides enough TAZ function to prevent disease expression. For this reason, a female who has a single TAZ variant is termed a ”carrier”. In other words, although the female who carries a TAZ variant can pass the abnormal TAZ gene on to her children, she will not show any symptoms of Barth syndrome because of the protective effect of the normal TAZ gene on the other X-chromosome. There are some rare situations where a female will have the features of Barth syndrome but there needs to be an additional genetic change impacting the second X chromosome/TAZ gene.

When someone has Barth syndrome or is a carrier but a TAZ variant for Barth syndrome cannot be detected in either parent, this is called a de novo variant.  De novo variants are typically sporadic.  In that situation, they pose no risk to future children of these parents. In a small number of cases, seemingly de novo variants are actually the result of gonadal mosaicism.  Gonadal mosaicism is the rare occurrence of a genetic variant in a subset of the eggs or sperm of an individual as a result of a random variant that occurs during the development of eggs and sperm.  The individual does not have any signs of the disorder, and the variant would not be detected by a blood test because it is in only the egg or sperm cells.  However, if one of the egg or sperm cells with the variant is used to conceive a child, that child will have the variant in all of the cells. 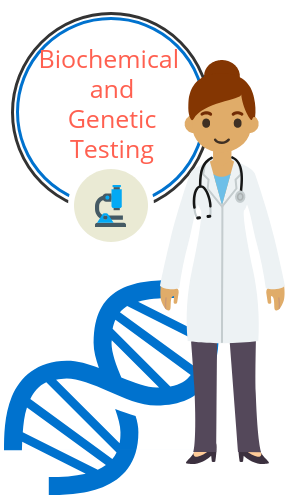 When someone has the symptoms of Barth syndrome, he/she should be offered diagnostic testing. Symptoms include:

There are two diagnostic tests for Barth syndrome which include screening for the disease biomarker called cardiolipin or genetic testing. Depending on where you live you may not have access to both. The cardiolipin test is performed very reliably on as little as 3ml of blood and usually takes only 1-2 weeks to receive results. This test is unfortunately not available clinically in the United States but is widely available in Europe.

The other diagnostic option is genetic testing, which can look for changes in the DNA code specifically in the TAZ gene or may include a number of other disease-specific genes, such as a cardiomyopathy gene panel. Genetic testing is performed on blood, saliva, or buccal (cheek) swab samples and results typically take 3-6 weeks depending on the laboratory used.

After someone has been confirmed to have a genetic diagnosis of Barth syndrome, further genetic counseling should be sought.  Further family screening may likely be recommended. Mothers of someone diagnosed with Barth syndrome may consider testing to determine if they are carriers. Further testing may be advised on other male siblings in the family.   Family members with a history of multiple male miscarriages, stillbirths or all female family members (only girls in the family) can consider testing to see if they are a carrier of Barth syndrome. 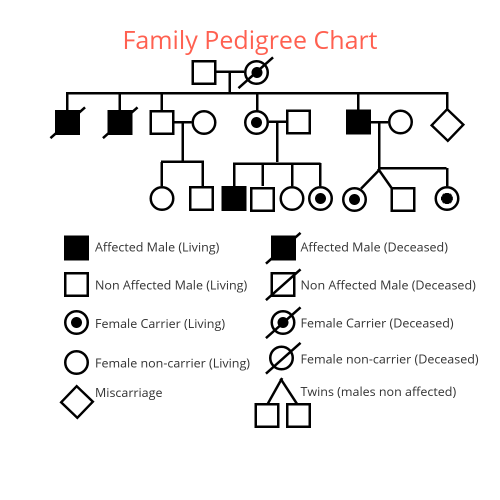 A pedigree chart is a diagram that shows the presence or absence of a disease such as Barth syndrome within a family across generations.

Disclaimer:  This fact sheet is designed for educational purposes only and is not intended to serve as medical advice. The information provided here should not be used for diagnosing or treating a health problem or disease. It is not a substitute for professional care.