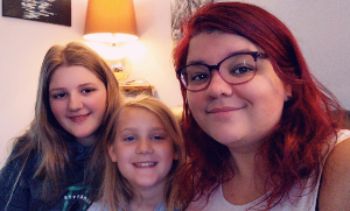 My name is Jessica Wright, and I am a carrier of Barth syndrome. I’m also the proud mother of three children. I have one son who is not affected and two daughters who have the potential to be carriers. My youngest brother, Jared, has Barth syndrome and Cerebral Palsy. I also lost a brother to Barth syndrome when I was eight.

I found out that I was a carrier when I was 18.  Due to my brother’s illness, I had known before that it was a possibility that I could be a carrier. After getting my positive result, I knew that the decision to have children and find a partner was going to be difficult. When I found out that I was a carrier, there were not a lot of resources available to me. Other than my mother, no one else in my family is a carrier. I consulted with a genetic counselor who lived two hours away. I didn’t really have anyone to discuss what this test result meant for my future because I didn’t know anyone in the same situation. When I met my husband, I remember having to have that awkward talk early in our relationship. I guess I wasn’t able to scare him away because here we are 15 years and 3 kids later.

When we decided to have kids that brought even more complications into play. There were genetic tests to do on the embryo which weren’t available where I lived. With the results of those tests, there was the possibility of some very hard choices to make. I was fortunate that my son is not affected, so the hardest choice wasn’t something I ever had to make. Barth syndrome is an x-linked genetically inherited disorder, so each of my daughters has a 50% chance of being a carrier. I hope that neither of them is, and that I’m the last woman in my family to be a carrier. However, I need to prepare them and myself for the possibility that they could be. My daughters are now 12 and 8. I have never had a detailed talk to either of them about their carrier status, but sometimes I feel it hanging over me. I would like to have faith in medical science that, by the time they are ready to start families, there will be better options for them. There are already better options for genetic testing than when I was pregnant, so I hold on to that faith.

I decided that I wanted to help with the carrier services project within BSF because I wanted to help women who were facing the same tough decisions that I have already been through. Being a carrier can be very emotionally exhausting and it’s hard for others to understand how heavy the label of a carrier can make you feel. There are so many young women like my daughters in this group who don’t know what the future holds for them yet. I hope that as a group we can support them through the difficult and emotional decisions that lay ahead of them, that we can respect the choices they will make, and do everything we can to let them know that they are not alone in their struggles.