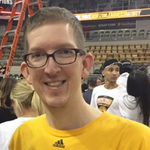 How old are you?

I hear a dog, what kind of dog do you have?

We have a Chihuahua, Dachshund mix. It has the Chihuahua top and little tiny legs.  If we throw a ball down the hallway, he tends to roll over himself, trying to catch the ball.  We have had him for about ten years now.  He was a couple of years old when we got him.  He isn't that active anymore.

Do you have siblings?

I have an older brother who is two years older than me.  He is married, and I have two nieces and one nephew.  They are a lot of fun.

How tall are you?

I am 6'2".  I was 4'11" going into my senior year of high school. I was 5'4" when I graduated from high school.  When I was in college, I grew to be 6'2".  I had two large growth spurts.  My brother and his friends called me Big Steve when I was in high school, even though I was the shortest person in my class.  That stuck, and they still call me Big Steve.  I guess it started as an oxymoron, but I grew into the name. It's funny when you run into someone you haven't seen since high school.  I had a bone ages study, which showed me two to three years behind in growth. The doctor was pretty surprised to see how much I grew between visits. It's a unique trait for BTHS for sure.

Tell me about your Barth syndrome experience.

Shortly after I was born, I was having seizures, heart problems, and difficulty with eating.  My care was provided through Cincinnati Children's Hospital.  There, I was treated for an unspecified muscular dystrophy.  They knew it wasn't Duchenne or Becker MD.  I stopped seeing the neuromuscular doctors when I was in middle school. I continued to see the doctors at Children's until I was nineteen when I transferred to an adult provider around 2004 or 2006.

I was never really unhealthy, but I tend to be sick for an extended time when I come down with something.   My mom watched Mystery Diagnosis, where Barth syndrome was featured about five or six years ago.  We brought it up to the doctors, but they didn't think I needed to go through genetic testing since it wouldn't change my treatment.  A few years ago I revisited genetic testing with my primary care provider.

In 2019, I reached out to the genetics department at Children's hospital.  The genetic counselor immediately thought it was Barth syndrome.  My diagnosis was confirmed through a dilated cardiomyopathy genetic panel.

What prompted you to finally reach out to us?

I wanted more information about the condition.  I didn't realize there was an entire community of people just like me out there.  That was a plus.  My parents were just talking about this the other day.  They said they wish they had been connected to this community when I was growing up. It's nice to contribute to the base of knowledge about Barth syndrome and to learn about it from others.

After I got the diagnosis, I searched Facebook and found a fundraiser by a family who lives just minutes from me.  I have never been able to attend one of the fundraisers.  I fully plan on going to one after we get through the COVID pandemic.

Tell me about your educational experience.

I don't feel that I was ever limited in terms of opportunities.  I was always able to try, which taught me the importance of doing things in moderation and making choices that were right for me.  I knew early on it wasn't a good idea to overexert myself.  The teachers were understanding with me.

I always enjoyed sports, but I couldn't play sports.  I was the scoreboard operator for junior varsity and varsity teams in high school.  It helped that I went to a small private school.

I attended Northern Kentucky University, which is also on the smaller size.  I had the flexibility of scheduling my classes with breaks in between, so I didn't have to rush from one class to the next.  I don't think I had many problems throughout high school and college because I learned to set limits for myself and realized the importance of doing all things in moderation.  I guess it helps that I have always been pretty level-headed and analytical.

When you grow up not knowing you have Barth syndrome or any other condition, I guess you learn to listen to what your body is telling you because that's all you have to rely upon.  You know to do what you can.  You learn to be happy and satisfied with what you can do. You can't miss what you have never had.

Yes, I studied Business Administration when I was in college.  For my first job, I worked in the Wal-Mart pharmacy.  I went back to school for medical billing in 2015.  Now I work in the area of auditing and coding.

Do you have something you really want to do when we are no longer under the cloud of COVID?

Yes, I’m a big sports fan.  I follow the Cincinnati Reds, Bengals, UC Bearcats.  I am a season ticket holder with my dad for the NKU Norse basketball team.  They recently became a division one team.  I went to the first NCA tournament they were eligible.  I checked one bucket list item off to attend a March Madness game in Indianapolis. I’ve always had a goal to attend games in as many baseball stadiums as I could.  I’d like to time it around the same time as when the Reds are playing there.  Baseball is probably my most favorite sport to watch.

What do you think we should do to accelerate diagnosis?

Hmm, that's a good question.  I think it's most important to spread awareness about the condition.  People won't be tested for it if they don't know about it. I've just been involved with this group for a short time. It's impressive to see the stage we are at with all the different research projects, clinical trials, and doctors involved.  There may be other people out there just like me who see a doctor on a routine basis but still don't have a diagnosis. They don't know there is this entire community of people working together to make a difference.  There is no way a doctor can know about all the rare conditions out there. So, it's up to us to spread awareness so they can know about Barth syndrome.