About the Speaker:
Dr. Fred Vaz is a Clinical Biochemist at the Amsterdam UMC, and is currently section manager of metabolite diagnostics and head of the Core Facility Metabolomics at the Laboratory Genetic Metabolic Diseases.

Dr. Vaz obtained his Master of Science in Chemistry at the University of Utrecht in 1997, and in 2002, he graduated with his PhD degree from the University of Amsterdam, under the supervision of Prof. Ronald Wanders. Dr. Vaz is the recipient of two research awards from BSF, with his 2002 award focused on the tafazzin gene function and its products, and in 2006 to study protein interactions of tafazzin and the impact of its loss at the protein level means for its lipid product, cardiolipin.

What does Tafazzin do and how does MLCL assay measure this enzyme?

In the 1990’s, Dr. Vreken discovered the biochemical cause of Barth syndrome. He initially recognized that something was wrong with the mitochondrial lipid called cardiolipin (CL), and at first, he simply identified that there was a shortage of cardiolipin in people with Barth syndrome.

Using a technology that was relatively new for diagnostic applications at the time, mass spectrometry, Dr. Vreken and colleagues began to look at the cardiolipin shortage problem in greater detail and consequently discovered that the related lipid monolysocardiolipin (MLCL) was heavily accumulating in Barth syndrome patients.

Cardiolipin has four fatty acid side chains while MLCL only has three (see figure below). Researchers at Amsterdam UMC realized that tafazzin was somehow involved in making the three fatty acids into four. Further collaborations helped to establish that tafazzin is an enzyme that can use one lipid as a donor of fatty acids, thereby helping MLCL gain an extra fatty acid chain to become cardiolipin. Cardiolipin in the heart is very rich in linoleic acid (>90% of the cardiolipin fatty acids is linoleic acid), which is remarkable and can only be the result of an active process that is only possible because of tafazzin. In the case of Barth syndrome, the conversion of MLCL and enrichment of linoleic acid is disturbed, hence the content of linoleic acid in cardiolipin is low and MLCL accumulates. 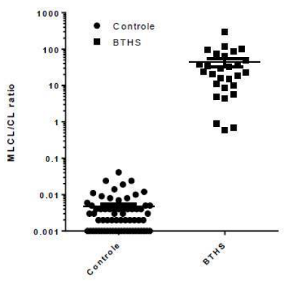 Why is the MLCL:CL ratio useful?

In healthy individuals, MLCL is low and CL is high. In people with Barth syndrome, this ratio is the opposite! As a diagnostic assay, it makes sense then that one could either measure accumulation and deficiency of these lipids, or use a ratio. In this case, a ratio is preferable and more discriminative.

The use of this ratio then creates a differentiating parameter to be used to identify individuals with Barth syndrome. First published in 2008 using blood spots, the team was concerned that it would be difficult to detect these specific metabolites in a very small sample of blood (only 10 microliters, especially considering that mitochondria are not present in red blood cells, so the amount of cells containing mitochondria was very, very small). Despite this concern, the test was successful and ultimately was established as a definitive diagnostic tool for Barth syndrome, especially for clinicians and geneticists working with a spectrum of inborn errors of metabolism.

It is rare to achieve 100% sensitivity and specificity in any assay or test, but remarkably, it is possible with the MLCL:CL assay. Most likely this is because the ratio of MLCL to CL in individuals with Barth syndrome is high enough that, so far in Dr. Vaz’s lab experience, every patient with Barth syndrome has been accurately identified using this assay. The concept of sensitivity and specificity refers to confidence relating to false-negative or false-positive test results, and accuracy of a test to be able to correctly identify or rule out a disease with certainty. As mentioned, the MLCL:CL assay appears to have 100% sensitivity and specificity and is additionally useful because it can be completed in less than one day when necessary. Although the MLCL:CL ratio in both healthy individuals as well as in individuals with Barth syndrome is quite variable the difference is high enough to diagnose a Barth syndrome patient. The level of the MLCL:CL ratio in a Barth syndrome individual is quite variable as the denominator of the quotient (cardiolipin) is very low. Yet, it appears that the ratio is relatively constant for one Barth syndrome individual and in addition to a diagnostic parameter might be a biomarker that can be followed in time. To use the MLCL:CL ratio in this way it is best to measure the ratio in lymphocytes and also take into account the level of enrichment of linoleic acid in cardiolipin. This will provide a more stable ratio and possibly new biomarkers that can be related to the severity of the disease.

Future research endeavors, with Dr. Vaz, his team and other collaborators around the world, could help establish the MLCL to CL ratio or related parameters as a biomarker of health in people with Barth syndrome. Alongside BSF, the participation of patients and families in research can make this an attainable and answerable scientific endeavor.